IUGA wishes to congratulate all of the winners of awards presented at the 2018 IUGA Annual Meeting!
IUGA’s current position as the leading international authority in the field of urogynecology can be credited to some very devoted individuals. At the Annual Meeting, we aim to acknowledge their hard work and dedication. 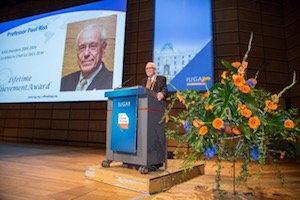 By receiving the Lifetime Achievement Award, Paul Riss joins the ranks of the IUGA elite! A founding member of the Austrian Society of Urogynecology and Reconstructive Pelvic Surgery (AUB) and the Austrian Continence Society, Paul also served as President of both IUGA and AUB. He was also the Editor in Chief of the IUJ from 2011- 2016. The IUGA Lifetime Achievement Award is presented to an IUGA member who has made an outstanding contribution to IUGA and to the field of urogynecology. The award was first presented in 2001 to Axel Ingelman-Sundberg, one of IUGA’s founding fathers and a great stalwart in the field of urogynecology. 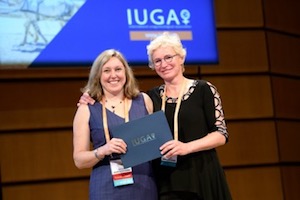 Sadly, in October 2017, the field of urogynecology lost a great leader and friend. Oscar Contreras Ortiz was one of the founders of the IUJ and served as President of IUGA from 1996 to 1998. In honor of his generosity, friendship, and contributions to IUGA and the field of urogynecology, IUGA created the Oscar Contreras Ortiz Award for the Most Impactful Publication in the IUJ. This year, the award was presented to Vergeldt T.F., Weemhoff M. Inthout J., Kluivers, K.B. for their publication, Risk Factors for Pelvic Organ Prolapse and its Recurrence: A Systematic Review.

Of the more than 650 abstracts accepted for presentation at the 43rd IUGA Annual Meeting in Vienna, three were chosen for special recognition and an award in the amount of $1,000 USD. 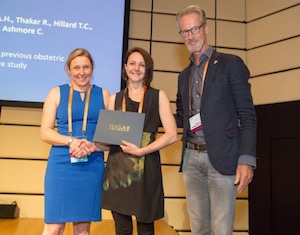 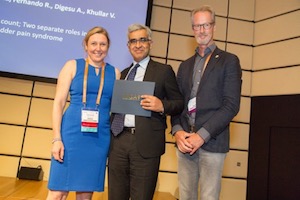 Best Abstract Presented by a Physician in Training Prize 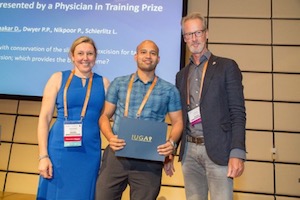 The 2018 Best Abstract Presented by a Physician in Training Prize was awarded to Karmakar D., Dwyer P.P., Nikpoor P., Schierlitz L. for their abstract Simple Closure with Conservation of the Sling versus Excision for Tape Extrusion: Which Provides the Best Outcome?

IUGA awarded two research grants in Vienna, each for $10,000 USD

Vatche Minassian (USA) for the project titled: Urinary Microbiome and Inflammatory Response in Postmenopausal Women with Urgency Urinary Incontinence Before and After Anticholinergic Treatment